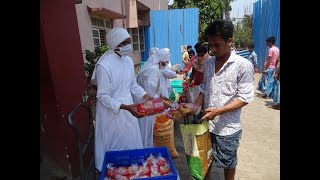 Wonderful Outstanding Women Award to the Little Sisters of the Poor at Tuticorin!

Diamond Jubilee - 60 years of vowed life of our Little Sisters! Dedicated to God and to His favored

Mr.Chandran and Mrs.Kamakshi’s 70th Wedding anniversary on 11th March 2018, at Secunderabad. On 11th March we celebrated the 70th Wedding Anniversary of Mr. Chandran 93 years old, and Mrs. Kamakshi 83 years old.Kamakchi was all excited to have a new sari , jewels etc…So she was accompanied by a Little Sister to go to the Market and get whatever she wanted , but Chandran was just happy to have a new dhoti. Both of them were beautifully dressed up well in advance for the specia

This year, one of our Jeanne Jugan Associates, Mrs. Usha organized a wonderful outing for the Residents at Food village. The Members of Lions Club and the Alliance club sponsored the day and entertained our Residents; played different games, music and dance etc. The winners received variety of gifts. A delicious lunch and snacks were served to all. After that the Residents were taken to the beach. They enjoyed immersing their feet in the sea water while others admired the